The Student Government Association announced events slated for the semester’s end such as Lagniappe Day, the third annual campus clean-up and the elections currently underway.

President Wil Perkins said each college president must email his or her college deans on behalf of the SGIC Committee, which oversees campus master plans, aesthetic improvements and academic building needs.

Vice President Mary McMahon said a record-breaking 392 people have signed up to attend the third annual campus clean-up at 8 p.m. April 8 at the University of Louisiana at Lafayette main campus. Breakfast and lunch will be provided. Students interested are encouraged to contact the SGA office.

Election Commissions enforced the 50 feet rule to all election candidates, barring candidates for SGA elections from campaigning 50 feet away from each STEP lab on campus. This prevent students from being bombarded with advertisements and to prevent votes from being swayed. Voting takes place from April 5-6 on OrgSync. Election announcements will be 5 p.m. April 6 in the Student Union Magnolia Room.

Greek Affairs reminded the senators that NPHC week is scheduled from April 10-14.

Lagniappe Week has now been changed to Lagniappe Day. It will be taking place on April 7 from 11-2 p.m. on Boucher Street. All traditional Lagniappe Week activities will take place on Friday, including swamp dives, canoe races and the crawfish boil.

18,000 pounds of crawfish will be served to students, faculty and staff. Students living on campus pay with meal swipes; off-campus students pay $8; faculty; and staff pay $10 and all non-University of Louisiana at Lafayette members pay $15.

SGA representatives of City/University Safety Program, or on and off-campus safety patrol officers with ULPD and the city police, said officers received 543 calls for service in their assigned areas since the beginning of this semester. CUSP is responsible for patrolling and responding to 911 calls received from several apartment complexes, such as: University Housing, Campus Crossings, The Quarters Apartment, Cottage Landing, Bayou Shadows and Bridgeway Apartments. The program has collaborated with ULPD to host a women’s self-defense class, called “Fight Like a Girl,” at Bourgeois Hall.

Per CUSP representatives, ULPD officers have been assisting Lafayette Police Department on locating a suspect involved in two counts of first-degree murder. 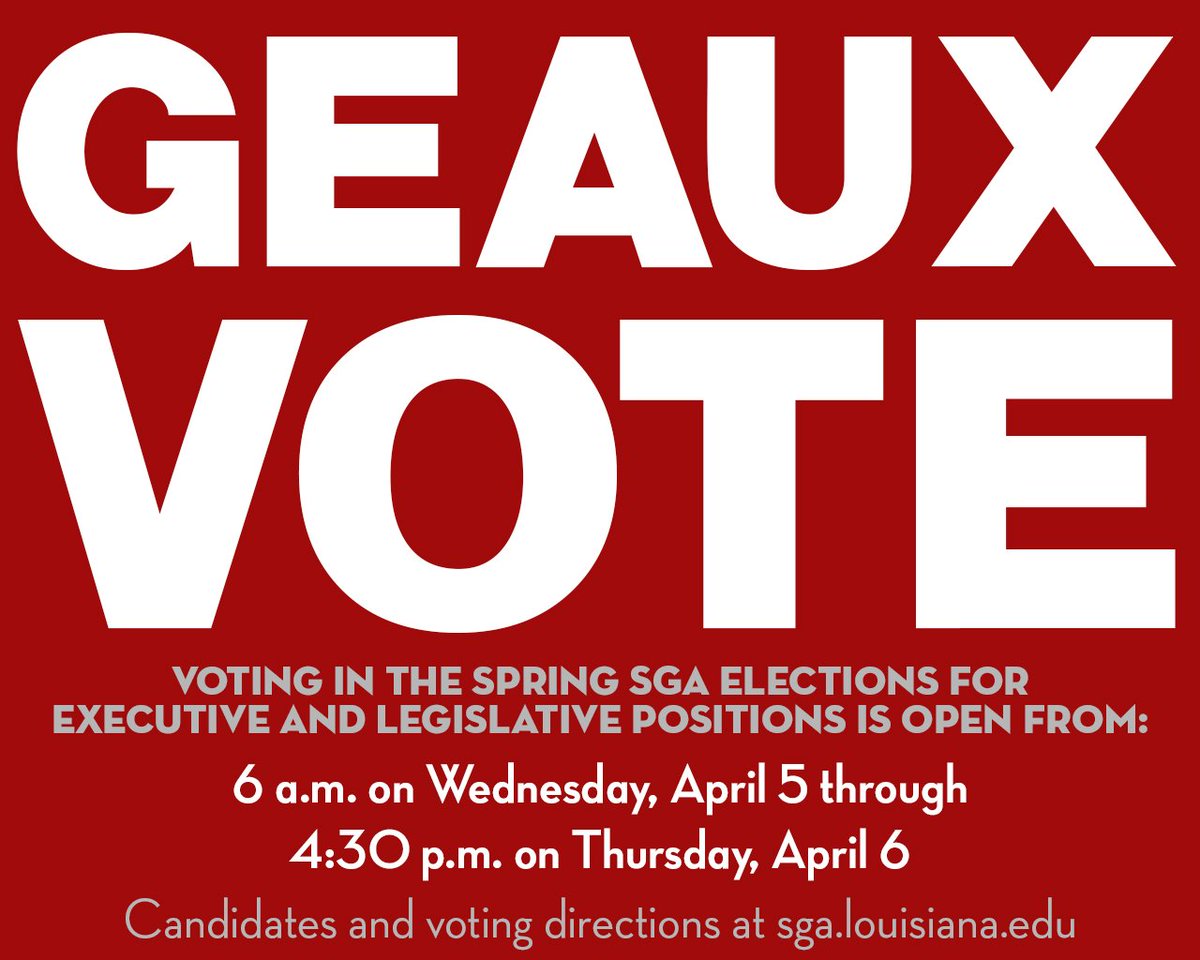 March 7, 2017 This Monday, Feb. 6,  the University of Louisiana at Lafayette Student Government Association discussed upcoming plans on their SGA Week, the annual campus clean-up and the 2017 election